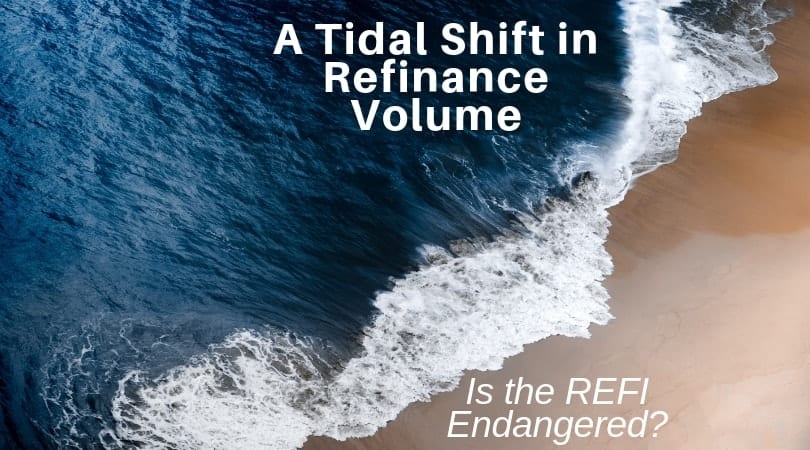 If you’re involved in the mortgage business, you may be feeling the recent industry concern regarding the fall in mortgage volume. While volume has made some small rebounds in September, the overall trend is toward a decline with a year-over-year drop in volume of 18%, and 39% for refinances.

Interestingly, according to MortgageOrb, the refinance share of the mortgage market increased to 32%, up from 29% in July. What does that say? We can only speculate that it might mean purchase mortgages may be declining in volume faster than refinance loans (contrary to the prior YoY figure) and/or the September bump in volume was enough to increase REFI marketshare.

Why has refinance volume and purchase mortgage activity declined? There’s no simpler explanation than rising interest rates and the resulting decline in demand due to rising financing costs. According to Freddie Mac, rates are anticipated to rise to over 5% by year end. Other factors include limited housing inventories and bearish investment due to the rising cost of capital and advancement in the market growth cycle.

According to CNBC, the majority of homeowners in the US have existing loans with rates below 4%. Considering this, we can hypothesize that the still limited need for refinance is even less due do the high refinance rates of the recent past that have already served/saturated the majority share of the refinancing market.

This situation is further complicated by the fact that rising rates are deterring homeowners from pursuing refinancing to take cash out or finance renovations. Borrowers are turning to second mortgages and home equity lines of credit to get the funds they need and to avoid refinancing into a higher interest rate on the full balance of their first loans.

So what does all this mean for the mortgage business and the future of REFIs? These cycles are typical and this time around, it’s not likely to be as severe due to consumer protection legislation, such as the Dodd-Frank Act, passed since the Great Recession. Additionally, many of the volatile market conditions such as the excesses in subprime lending and availability of credit aren’t present today to the extreme and detrimental degree as in the period leading up to 2007.

If you’d like to talk with the team and I about what’s happening with the economy and local market, please give us a call or hit the chat button to the right. Btw, that’s not a chat-bot, it’s actually us.